In april 2006 I had a very nice tour of the Banat Region together with Cosmin who is a good friend of mine.
I am from Ineu and he is from Sibiu so we decided to meet at Slatina-Timis at the very bottom of the Semenic Mountains.
I cycled 250km in 2 days crossing the Western Plain till I got to the meeting place.
We were glad to be again on a bike tour together so we decided to celebrate a bit, we bought the necessary provisions and drinks and after climbing a bit on the Slatina Valley we found a generous camping place where we decided to spend our night.
Here we enjoyed a great time sharing memories and adventures, drinking beers and warming ourselves with a magnificent bonefire.
We went to sleep in our tents quite late and we got up rather early next morning.
Here we were ready for a great bike tour in a wonderful region of Romania. 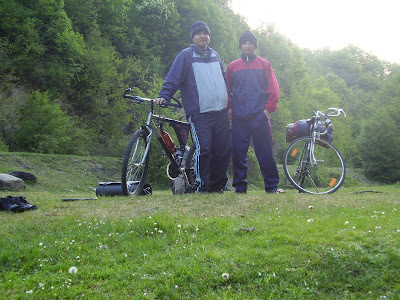 After a few kilometers of climbing I warmed up a lot and I put on some summer clothes. Soon we were lucky to find a spring for we had run out of water and we were very thirsty after so many beers last night. 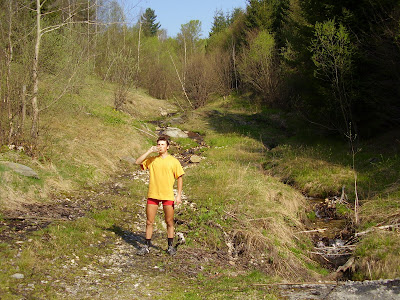 We climbed a lot and the road was unasphalted with many hairpins. In about an hour we got to a spectacular scenery. Many trees were in bloom, the forest was so green and nice rolling mountains were looming in the distance. 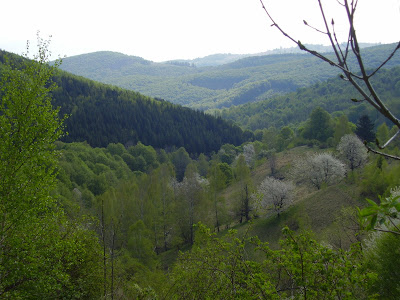 Soon we got to top of the pass and the views with the Semenic Mountains were so generous. The temperature rose and it was a great weather for cycling. 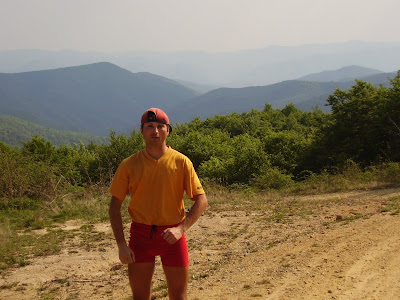 Then we had a small descent till Brebu Nou and then the road was a false flat till a storage lake. 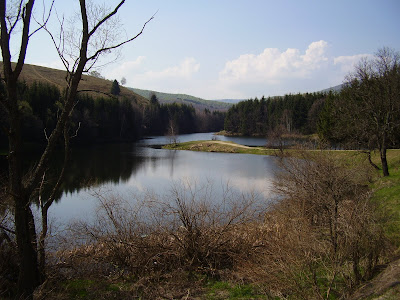 Here we made a halt to rest a bit and enjoy the views. 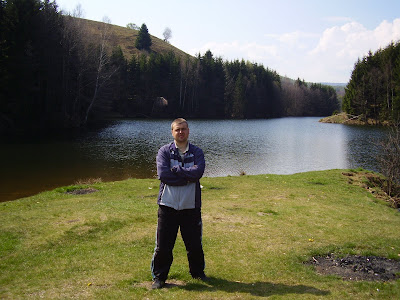 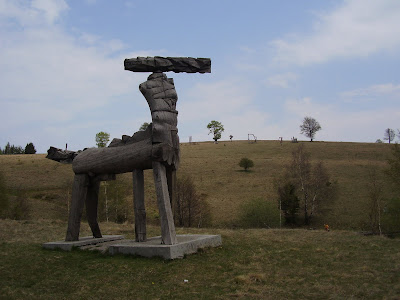 Soon we got to the pass that is 1000m high and then we had a speedy descent of a few kilometers and before entering Valiug township we turned left, cycling next to Gozna lake and then following some forestry roads through a very scenic and wild scenary till we reached the small town of Anina. From here we followed the Minis River and we had a steady and easy descent, entering a spectacular National Park. 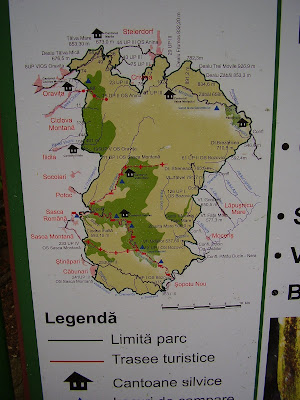 Soon we were cycling in the dark and out of the blue we got to a cave and I couldn't help exploring it a bit. But it was an ordinary one. 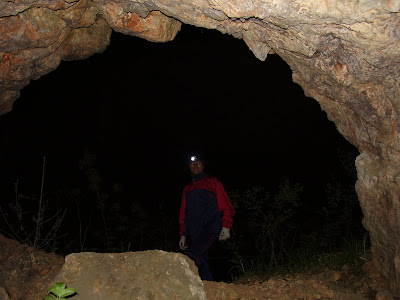 Within a few minutes we found a good place to put up our tents and after we ate we went to sleep this time without no fire for it's forbidden in this area.
Next morning we started cycling quite early and it was rather chilly so I had to put on my cap. 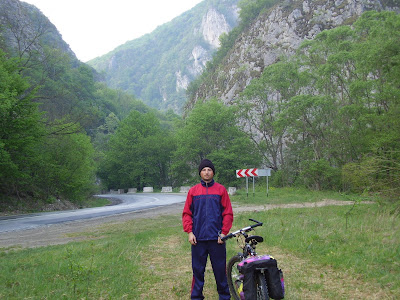 The landscapes were very lovely indeed. 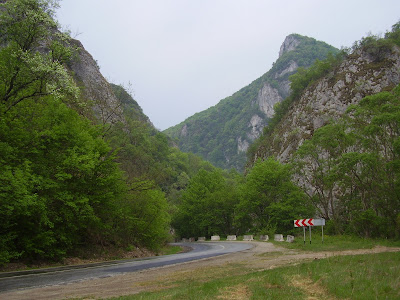 We were soon cycling in the Minis Gorges. Rugged cliffs overlooking the sparkling Minis River and sometimes the fragrance of the lilac's flowers was very intense. 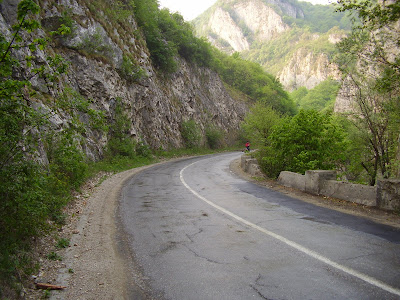 Soon we got to a touristic spot where we stopped to visit a famous karstic intermittent spring. To get there we had to cross a wooden bridge over the Minis River. 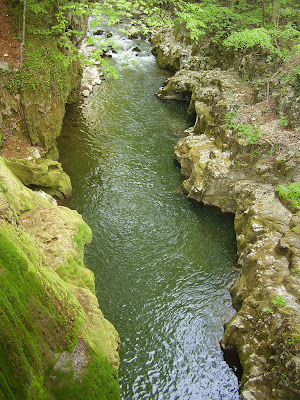 Here we could gaze at a scenic waterfall. 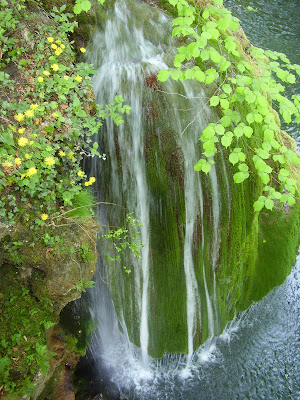 On our way to the spring we followed a footpath in a very wild scenery. In a few moments we ran into another waterfall. 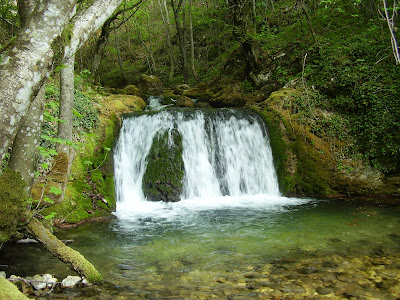 After visiting the interesting intermittent spring we kept on cycling till Bozovici, and it is here that we followed a secondary road with very few traffic. After 15 kilometers at Barz village we turned left on a forestry road and we started climbing Locvei Mountains following a small stream.
This route offered us amaizingly unspoiled and pristine nature. We were soon in a very good mood to cycle in such a paradise. 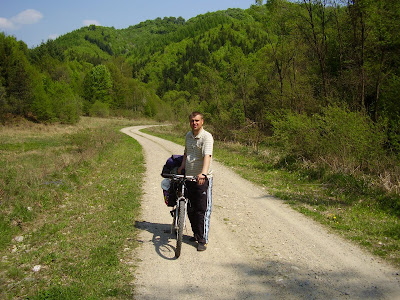 After 10 kilometers of steady climb we got on top of the pass at Ravensca village where there are many inhabitants of Czech origin. Here we could visit their lovely church. 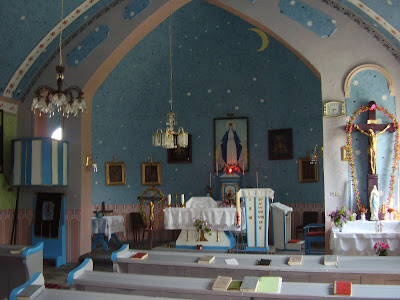 From here we had to go down about 15km on a bumpy road till we got to The Danube River. After Berzasca the night overtook us but before this we enjoyed a spectacular sunset. 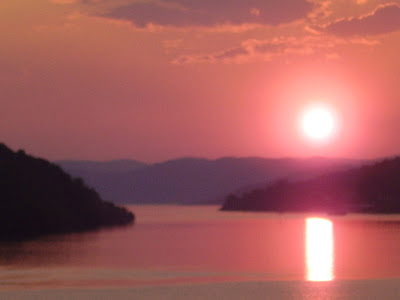 I was pretty inspired and seized the oportunity to have a magnificent picture with me, the Danube and the mighty dusk. 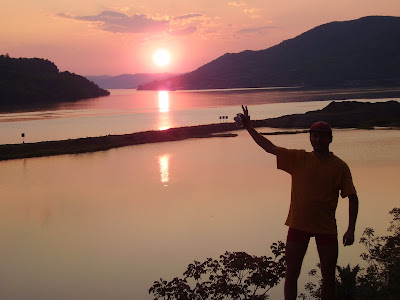 Then we stopped at a pub to have something to eat and to drink and here I struck up a frienship with a black cat. 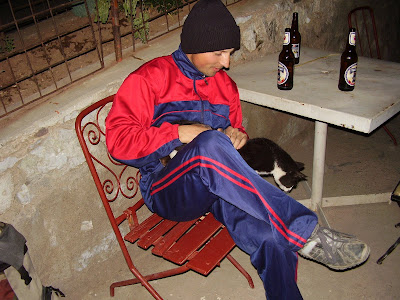 Later on we pitched our tents on a meadow not far from here. Next day we enjoyed cycling on a very spectacular route next to the river. The Danube Defile is the longest in Europe and is one of the best places for cycling tourism.
We had such an enchanting day packed with atmospheric vistas. 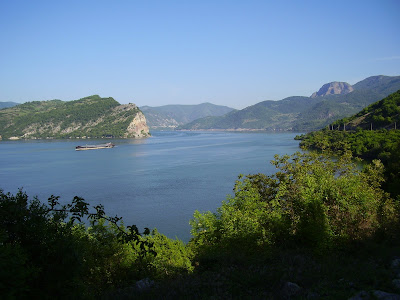 As it is quite a warm day even if we are in the last days of April, all of a sudden at a certain moment I make up my mind to start my aestival season. And here I am jumping into the river. Oh, Gosh, how cold it is! 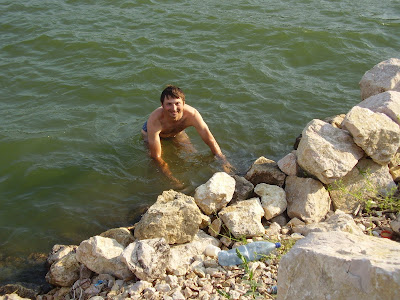 Then I have to increase the speed to warm up again. 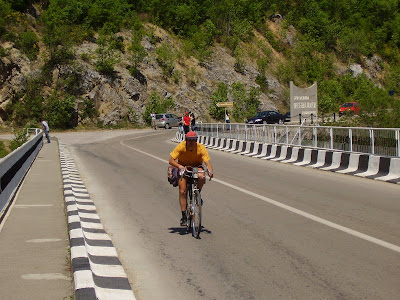 After we pass Dubova village we get to the biggest statue of Europe wich is situated in Mraconia Bay. The statue is 55meters high and epitomizes the head of Decebalus, the illustrious king of our ancestors, the dacians. 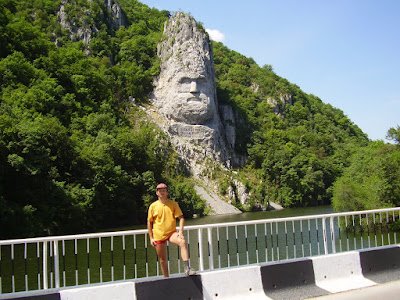 Here starts a short section where the Danube is very narrow and on the opposite side there is "Tabula Traiana", the ancient road of the romans specially designed for their invasion in Dacia Felix. 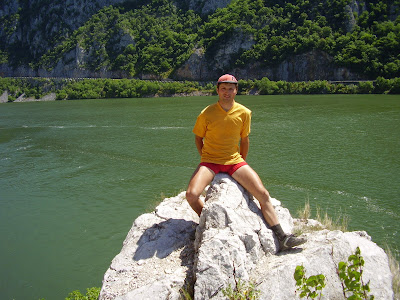 From Orsova we went to Herculane Spa where we had a bath in the thermal waters then we followed the Cerna Valley cycling in a very delightful environment. We could admire plenty of white rocks endowed with black pines. 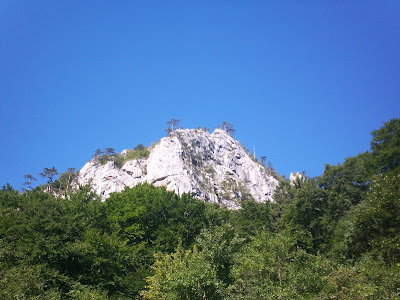 We had a long and steady climb and after Cerna village we encountered Corcoaia Gorges wich are quite spectacular. 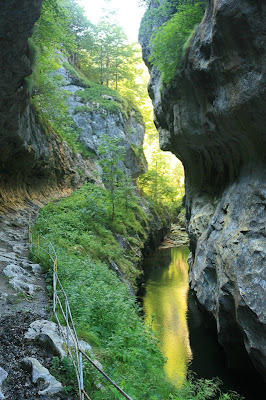 Then we climbed again till the night overtook us in the wilderness and we set uo our tents in the pass at about 1330m high. 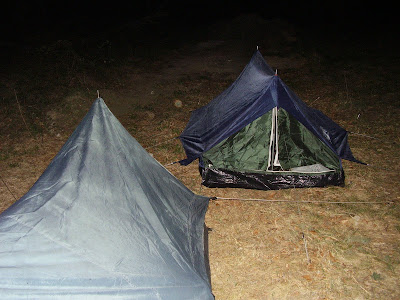 The next day we had a very long descent till Petrosani. From here we made for Hateg where we had to separate, Cosmin directing his steps towards Sibiu and me having to cycle another 190km till home.
We saluted once again the Retezat Mountains and off we went. 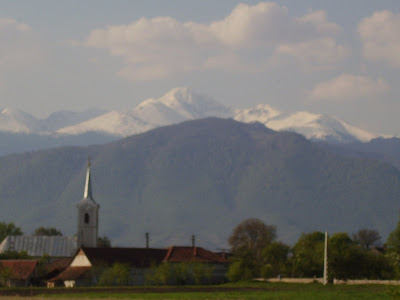 Such a lovely tour we had!
Publicat de Claudiu Moga la 18:43 2 comentarii: